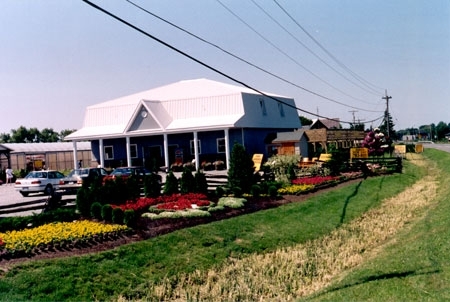 The Richmond Nursery started out not in its current location, but in an area called "Ottawa Park" near the dead-end of Ottawa Street. This was behind George and Claudia's original home.

The first real crop at the nursery was a strawberry plantation. As the berry business started to become somewhat successful, "George's berry patch" as it was affectionately known, formally became Richmond Nursery in 1970.

In addition to berries, nursery stock was grown. Since landscaping was in its infancy, nobody shipped plants as far as Ottawa so you had to grow your own material. After working with woody plants and fruit crops, greenhouses were added to grow bedding plants and in the spring the old hoop-houses were filled to their limits with plants, right to the edges.

As the business grew, more land and a better location was necessary, so the Garden Centre moved to its current location at the corner of Richmond Road and Eagleson Road in 1977.

Today, Richmond Nursery is a 48,000 sq. ft. facility with 250 acres of land, which they rent around 60% of the land to a sustainability program. This is all managed by Peter, George and Claudia’s son, where he continues to grow the business, face everyday challenges and retain their roots as a growing facility.