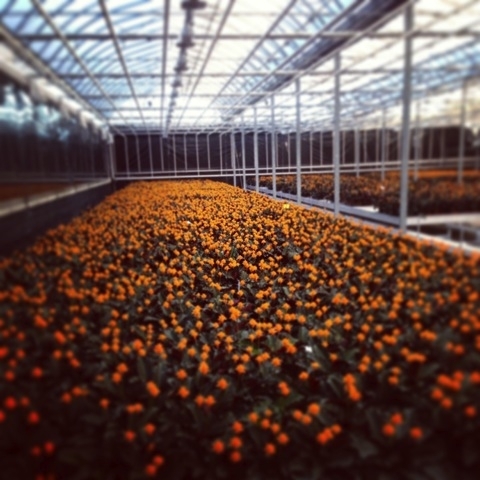 Sunrise Greenhouses Ltd. is a family run operation founded by Robert & Francis Bierhuizen in 1982 and is located in the heart of wine and horticulture country in Vineland, Ontario.

Robert grew up in Rotterdan, a city in the Netherlands.At a young age, he was introduced to greenhouses from a friend’s father who had a little greenhouse in his backyard.As kids, they were always puttering around in it.Later, he took on picking tomatoes after school in greenhouses in the Berkel-Rodenrijs area just outside Rotterdam.He then went to horticultural school for four years, and then advanced to a higher level for three more years.

In December of 1976, Robert and Francis were married and in the following month immigrated to Canada.Robert instantly started working at Westland Greenhouses Ltd. which provided him his first opportunity in the greenhouses.

In 1989, Robert and Francis purchased a 12-acre property.Today it is over 176,000 square feet of covered growing area, plus rented property, producing potted plants, including Mini-Roses, Easter Lilies, Chrysanthemums, Caladiums and Campanula for the wholesale market.

Over the years, Sunrise Greenhouses Ltd. has been recognized as one of the foremost leaders in greenhouse innovation. From development and implementation of greenhouse equipment, which includes automatic booms, table stacker, packaging equipment and energy efficient technology.

In 2000, Robert’s leadership role was recognized by, Flowers Canada (Ontario) Inc. when he was selected for our prestigious Grower Award.

According to Robert, being able to stand out amongst the rest and giving customers a new approach to decorating their homes is always a constant goal for the team at Sunrise! They take great pride in the plants they offer as majority of lines are exclusive to Sunrise Greenhouses in North America. The unique plant lines are sought out carefully and searched upon in great deal generally over many years!