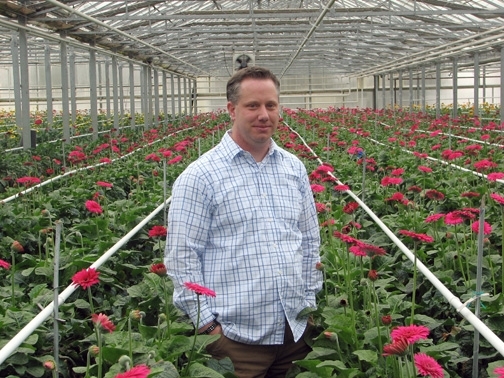 Standing in a greenhouse field of perfect Gerbera daises when it is 10 below with 2 feet of snow outside is a smile inducing experience.

At least it is for Bryan Van Geest, who runs 300,000 square feet of greenhouses.  There is the Grimsby operation of the Van Geest Bros., which is 120,000 sq feet of Gerbera, there is also Westdale Greenhouses in St.Catharines under one umbrella. Westdale is managed by brother John, who grows Spray Mums, Mini Gerbera and Alstroemeria under 180,000 square feet of glass.

This second generation of Van Geest Brothers have seen a lot of changes in their business since the first generation of brothers, Adrian and Cor, bought a one-acre greenhouse on Kerman Ave. in Grimsby in 1959. They began by growing a variety of potted and cut flowers and by the mid-sixties had built their first poly (plastic) house for tomatoes. But the end of the 60’s, with Cor running the company it was established as a cut flower specialists with Chrysanthemums and Carnations. Carnations were gone in the 70’s with a transition to Chrysanthemums.

August 1986 set out on a major expansion with the purchase of Westdale.  Alstroemeria was added to their product mix, mostly to replace the declining market for Commercial Mums. After a number of other crops were tested over the next few years, Gerberas became the focus for the Grimsby greenhouses and a further expansion in 2001.  Today Alstromeria is also being replaced by Gerbera. Currently, biological are used to keep a clean crops. Van Geest Bros. were pioneers in the biological as they know it was much better for everyone.

Cut Gerberas are shipped to wholesale markets as wet packed.  They are packaged for retail markets on green cards that protect the showy flower heads.  Van Geest Bros. also make hand tied bunches of flowers and grower bunches of agerbera.

Customers can Pick Ontario grown fresh cut Gerberas by asking for them by the Van Geest Brothers brand name. Every bunch is sleeved with the logo so customers can quickly identify the superior Ontario grown quality.

To get the most out of Gerberas, Bryan recommends using vases that have been washed with a drop of bleach to kill any bacteria that might be lurking in the container. Changing the water daily and placing the flowers out of direct sunlight and away from ripening fruit are also good life extending tips. And then enjoy the beautiful bunch of gerbera.