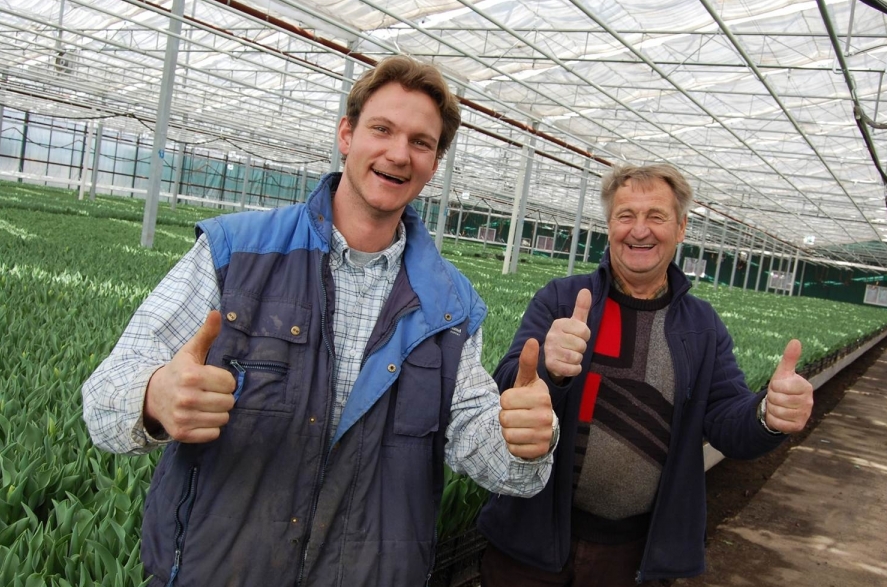 Henk Sikking SR. felt like a pioneer when he came to Canada from Holland almost 40 years ago, to start a flower bulb forcing greenhouse business in St. Catherines, Ontario.  Today Henk Sr., along with sons Henk Jr. and Peter, own and operate Pioneer Flower Farms, one of the largest flower bulb forcing farms in North America, producing over 45 million blooms per year, 35 million tulips and 10 million other bulb varieties.

Pioneer Flower Farms imports all its bulbs from Holland.  “ You need really good bulbs to get great blossoms and Holland produces the best in the world,” beams Henk Sr. The farm includes 300,000 square feet of greenhouse space and nearly two acres of cold storage. Eighty percent of the farm’s business is with the United States in direct sales with chain store retailers as well as indirectly through wholesalers.

Henk Jr. is in charge of potted plants, his brother Peter runs the cut flowers division, while Henk Sr. oversees the entire operation. The farm is the main supplier of buds for Ottawa’s annual tulip festival as well as the bulb flower supplier for the prestigious annual Toronto flower and garden show, Canada Blooms.

“Our spring potted bulb crop includes tulips, iris, daffodils, hyacinth, muscari, crocus, lilies and mixed planters,” says Henk Jr. Potted bulbs represent about half of the company’s annual production and cuts account for the other half.

Pioneer Flowers Farms was one of the first flower farms to take advantage of the the Seasonal Agricultural Workers Program (SAW) , a federal guest-worker program that has been in existence since 1966.

“Because of the type of crops we grow, our labour needs peak in the spring and again in the fall when all those bulbs must be planted in order to get the spring bloom,” explains Henk Jr.  Pioneer Flower Farms local year-round staff of 40 people increases to 170 during the peak seasons.  “Most of our seasonal employees are from Mexico and the majority come back year after year.  That consistency really helps our productivity” adds Henk Jr.

In the cut flower barn, workers are stationed along a cut tulip planting assembly line, carefully placing tip side up, 100 bulbs to a tray. The bulbs are watered, covered in dirt and sand, and placed in cold storage for four months, until they sprout roots. The bulbs are then taken to the greenhouse for three weeks, where they will form buds.

Pioneer Flower Farms cut flower harvest ranges between 100,000 to 200,000 stems per week and includes tulips, iris, daffodils, lilies and hyacinths. The flower stems are sorted and packaged in a massive post-harvest room then stored in the cooler until shipped in temperature controlled trucks to markets across North America.

Pioneer Flower Farms also produces potted amaryllis, mums, geraniums, poinsettias and mixed containers for the summer, fall and Christmas markets. The Sikkings stand in front of some freshly cut lilies on their way to the flower auction in Toronto, and by the end of the day, to a flower shop near you.

Back on the farm, workers carefully stack tulip buds into crates: red, pink and white. Forklifts help transport the crates from the assembly line area in the barn to the loading dock at the other end of the greenhouse complex. They load the crates into trucks and dispatch them to the National Capital Commission in Ottawa. At the tulip festival, the blooming buds are a symbol of the safe refuge that the Dutch royal family found in Canada during the Second World War.

For more information about Pioneer Flower Farms, visit the website at www.pioneer-ppf.com.