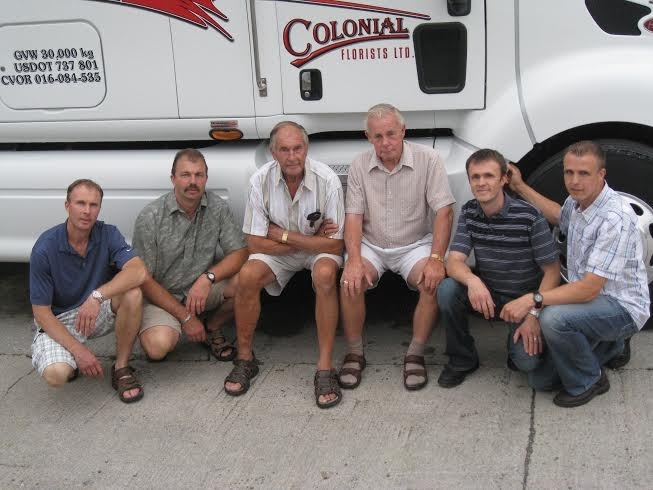 Posted on December 13, 2013 By Flowers Canada Posted In General

(St. Catharines, Ontario) – July means the start of the Christmas season for Ron van der Zalm. He’s a greenhouse flower grower in St. Catharines and the height of summer is when he starts growing popular Christmas plants in his greenhouse, like Poinsettias, Cyclamen and Frosty Ferns.

Together with his brother and two cousins, Ron runs Colonial Florists, a second generation family wholesale flower business with 11 acres of greenhouses that was started by his father and three uncles more than 50 years ago. The Frosty Fern is a fairly recent addition to their Christmas line up and it’s one that is growing in popularity.

“Frosty Fern is still fairly new, we’ve only been doing it about five years,” he explains. “It’s still a growing market as there are still many people who haven’t heard of it. We’re one of four main growers of Frosty Fern in southern Ontario and we propagate the cuttings for most of the other growers.”

The slow-growing fern is known for its yellow edging, which turns white as the temperature cools, giving the look of frosted tips. If the cooling is timed properly in the greenhouse, says van der Zalm, the plant looks like a little Christmas tree with frosty edges. It doesn’t need much care except regular watering and can be kept year-round.

“We dress it up at Christmas to make it a gift item. It also looks nice in a mixed Christmas planter, which we do a lot of, with a Poinsettia and perhaps a Cyclamen or a Christmas cactus,” he says. “It’s fairly easy to look after and if you can find a cooler spot in the house to keep it, you’ll keep the white edging. “

Van der Zalm’s Poinsettia cuttings come into the greenhouse in July, as do the Cyclamen and the Frosty Fern, so that they’ll be ready for the busy holiday season. And when Christmas is behind them, they move right into propagating their more than 30 varieties of spring annuals, such as geraniums and petunias, which is their principle business.

“When one is done, the other starts; it’s a continuous cycle in the greenhouse. We start slowly ramping up for spring in December already and we really get going by late January,” he says, adding that Colonial Florists has about 80 employees during their busiest times, a number that

enhouse sells the Frosty Fern and its other Christmas plants mostly to garden centres and markets in the Greater Toronto area, as well as through the Ontario Food Terminal and to Longo’s
grocery stores. Their spring annuals, including hanging baskets, are also sold through Costco stores and into Connecticut, where most end up at Home Depot stores throughout the state.

“We try to produce a higher end, more upscale product and our specialty is that we grow everything from cuttings and not from seed,” he says, adding they also support a lot of fundraising programs with their Christmas plants.

“We’re always trialing for European Poinsettia breeders to see how their varieties will perform here as we have a different climate and light levels,” he says. “We’re always dabbling with other Christmas crops and our eyes are always open. There are a lot of ferns out there but not with the Christmas appeal that the Frosty Fern has.”


The Latest from Pick Ontario