More than 80,000 square feet of homegrown freesia and hydrangeas are bursting into bloom under the expert care of Jan Van Zanten.

VanZanten Greenhouses set up shop on Ontario’s Niagara Peninsula in 1988, after the family immigrated from Holland. They hailed from a long line of greenhouse vegetable growers, but upon arriving in Canada, Van Zanten’s father broke from family tradition and turned his attention to flowers. Lilies, mums, snapdragons and a host of other flowers filled the first modest 20,000-square-foot greenhouse.

Two years into the family’s experiment with flower farming, they decided to make another switch, focusing on growing freesia for the fresh cut flower market.

“We did the freesia because my dad’s best friend in Holland also did freesia, so it was a great way to learn and keep on top of things,” Van Zanten explains. The fact that freesia isn’t an easy crop to grow was another important factor in the decision.

“We’re small so we tend to go for the stuff that’s difficult to grow because the big guys will never do it.”

To keep crop in the greenhouse during the summer months, when nights no longer afford the cool temperatures freesia prefer, VanZanten Greenhouses added hydrangeas to its growing line up in 2005. These two crops are a good mix. As the freesia move out of season, the hydrangeas enter the ideal window for harvesting, ensuring that there is always work to keep Van Zanten, his wife, his father and five staff busy for much of the year.

Growing hydrangeas is precise work. As Van Zanten explains, achieving the right colour specifications to satisfy customers takes a lot more than just a green thumb. “With hydrangeas, you’re not buying the flowers anymore. They’re like poinsettias,” he says. “You’re buying the colours of the leaves once the flowers have already bloomed out.”

White hydrangea cultivars bloom the same vivid white, regardless of soil and growing conditions. But by playing with pH levels and the levels of aluminum in the soil, growers can coax other cultivars to bloom either pink (without aluminum in the soil) or blue (with aluminum). Just like the leaves on a tree, the hydrangea’s colour transforms throughout the growing season, covering a range of the colour spectrum. Harvesting the perfect hue is as much about timing as it is about soil chemistry and growing conditions.

Beginning around June, pink and blue hydrangeas are ready for harvest in Ontario. Van Zanten says these “fresh” colours are available for anywhere from 10 to 20 weeks. The bulk are available at the lower end of this range. By the end of July and beginning of August, the plants are beginning to mature, with pinks and blues giving way to shades of green.

As the long, hot days of summer start to slip away, the hydrangea’s leaves begin to turn red. In Ontario, vibrant, bold shades typically become available in early to mid October, just in time for Thanksgiving.

“Those are really beautiful because you still have the hints of green in there with the red,” says Van Zanten. “When they get to that greenish red, they’re into the antique stage.” At this point, he says, you can dry the hydrangeas to preserve them longer. “You can easily keep them for three to four weeks, whereas in the fresh stage, because they’re holding so much water, they just don’t last.”

In order to meet customer expectations, Van Zanten depends on constant feedback from the wholesalers who distribute his product, as well as the florists who use his stems in their businesses.

“If they’re telling me that there’s too dark a yellow and it doesn’t match with weddings, I will not only remember that, I will write it down and make a point of growing a better yellow next time around.”

Keeping clients throughout the supply chain happy right through to the end consumer sometimes means educating people about how the time of year and growing conditions factor into colour availability. The same striking royal blue hydrangea that appealed to a bride on the pages of a wedding magazine may not be available when she’s ready to tie the knot at her winter wedding.

After seven years of tending to hydrangeas, Van Zanten is contemplating changing up his crops. Though he expects freesia will remain a staple in the greenhouse, some of his existing plants may be making way for some new neighbours. When picking a new plant variety to add to his repertoire, Van Zanten always keeps the niche factor in mind.

“I like something that people are going to go ‘ooh’ and ‘aah’ over,” says Van Zanten. Business considerations factor into the decision too. “Take ranunculus for instance. I’m absolutely in love with them, but I will never be able to compete with [growers in> South America, so I’m not even going to bother.”

Being choosy about what grows in the greenhouse serves another purpose too. By focusing on niche crops and respecting their natural growing seasons, Van Zanten’s flowers are available for a limited time. When consumers see the beautiful blooms in their local flower shop, the varieties are novelties, encouraging customers to buy now or risk missing out.

“If a person has a bunch of freesia in their house every week – or roses, or gerberas – after a year they’re going to be sick of it and they’re never going to want to see them again,” says Van Zanten. “But if you see cut amaryllis, which are only available around Christmas in November and December, you’d better grab them while you can.”


The Latest from Pick Ontario 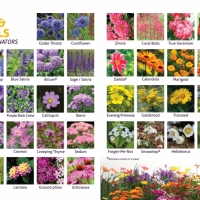 Pollinators and your garden Pollination can occur in many ways: bees, butterflies, animals, and wind. In Ontario, over 1000 insects and animals including bees and butterflies use pollen & nectar from flowers. By choosing locally grown,…